There is an urban legend that suggests Granite can emit harmful levels of Radon or other forms of Granite Radiation in Normal Household Applications. It’s just not true.

Scientists have spent years trying to determine the facts behind this persistent rumor. They have consistently found that granite countertops are safe when properly installed in a home.

The myth endures because it has been promoted by some companies that manufacture synthetic stone countertops as a way to increase sales of their products, which consumers have consistently found to be less desirable and less attractive than natural stone.

Plenty of people have been fooled. The myth has even been the subject of some news stories. But scientists who have studied hundreds of different types of granite countertops and analyzed thousands of countertop installations have not found any situation that poses significant radon or radiation risks.

What is Radon, Anyway?

Radon is a naturally occurring radioactive gas found all around us. The U.S. Environmental Protection Agency says the primary source of radon in a home is the soil surrounding it and some types of stone beneath it.

Most radon dissipates in the atmosphere, but sometimes it can seep into a home’s basement. In high enough concentrations, prolonged exposure can lead to lung cancer. But radon problems are easily fixed in a home with the installation of radon venting equipment. Scientists have determined that granite countertops do not significantly contribute to radon concentrations in a home.

Some natural radioactive elements may be found in a few types of granite. However, studies have consistently shown they are not a significant source of radiation. In fact, other things routinely found in a home tend to emit radiation, including concrete blocks, smoke detectors, television sets, Brazil nuts and even bananas and potatoes. Don’t worry, though, they are no more harmful than granite countertops.

What advice does the EPA have about radon for consumers who have granite countertops?

EPA believes the principal source of radon in homes is from the soil in contact with basement floors and walls. To reduce the radon risk you should first test the air in your home to determine the radon level. There are many do-it-yourself radon test kits available through retail outlets and on-line, starting at about 25. While natural rocks such as granite may emit radiation and radon gas, the levels attributable to such sources are not typically high. 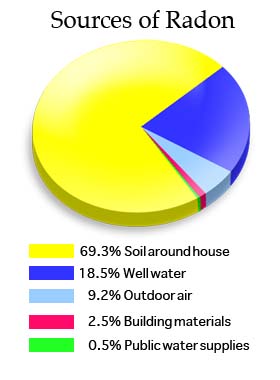 You are hundreds of times more likely to be at risk for radon emanating from the soil beneath your home. Granite is considered a Building Material.